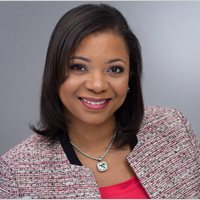 Effective, May 1 2016, Robinson will succeed the retiring president, Richard (Dick) Huebner, who dedicated more than 31 years of service to the organization, building its reputation as one of the most respected and active councils in the nation.  Huebner will stay on for two months to assist in the transition.

Chris Haas, Chairman of HMSDC’s Board of Directors, states, “Robinson’s expansive leadership and management experience in every aspect of minority business development makes her uniquely qualified to build upon HMSDC’s legacy of excellence and business opportunity creation.”  Over the course of her career, Robinson has served in various legislative, regulatory, non-profit, corporate, and entrepreneurial roles, working on behalf of minority, women, and small business owners.

As the new President, Robinson plans to leverage and build upon HMSDC’s past successes and foster a culture of innovation — innovative programs as well as corporate procurement strategies and meaningful relationship-building between corporate members and minority business enterprises (MBEs). “I was delighted to learn of Ingrid’s selection!” said Dick Huebner, “I truly believe that she has the ability, passion, and relationships to take the HMSDC to the next level and beyond.”

When asked about her strategy and direction for the organization, Robinson mentions she is carefully weighing options and meeting with trusted advisors and HMSDC stakeholders with a particular focus on seeking input from both corporate members and MBEs of the Council. “My first objective is to listen to and to talk with the members of the Council; this is their organization. I want to make it clear that I view my role as an active partner, charged with ensuring the organization’s continued success and leadership in minority business development.”
“I look forward to serving the HMSDC team as its new president and I’m honored to follow in Dick’s footsteps.  His legacy is exceptional and it ignited my passion for minority business development more than 20 years ago.  Dick taught me the fundamentals that have served as the foundation for my success in this profession and I am ready to chart the course for the organization’s exciting future!” said Robinson.

The mission of HMSDC is to actively involve its members in efforts that will increase and expand business opportunities and business growth for Minority Business Enterprises and to drive excellence in supplier diversity and supplier development.  Currently, HMSDC’s membership is comprised of more than 170 major corporations and more than 600 minority businesses.  HMSDC MBEs have a total economic impact of $22.8 billion that is composed of over $17.1 billion dollars in output that results in the creation and/or preservation of more than 67 thousand jobs. Ingrid Robinson may be reached at Ingrid.Robinson@hmsdc.org or at 713-271-7805.

Education:
Bachelor of Science in Political Science from the University of Houston; Masters in Business Administration from Rice University.